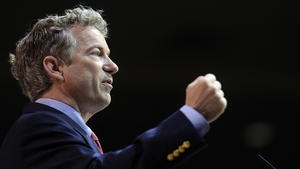 Ron Reagan calls religion a ‘delusion’. In a recent video he signs off: “Ron Reagan, lifelong atheist, and not afraid of burning in hell.” The picture of him shaking his fist is eerily symbolic.

How sorrowed it would make his famous president-father who said:

“Without God there is no virtue because there is no prompting of the conscience…without God democracy will not and cannot endure…if we ever forget that we are One Nation Under God, then we will be a nation gone under”. (Ecumenical Prayer breakfast: August 23, 1984)

I believe what the Bible says. There is a heaven and a hell. The decisions we make on earth impact our future eternity. I’m reminded we’re all tempted by our own prideful hearts to go our own way instead of God’s. It may not seem so blatant as to stand up and shake our fists at God, but in essence that is what it is. We pridefully sing along with Frank Sinatra, “I faced it all and I stood tall. I did it MY way.” But is “my way” best? Job 15 talks about such foolishness:

“Would a wise person answer with empty notions…? Would they argue with useless words, with speeches that have no value? But you even undermine piety and hinder devotion to God. Are you the first man ever born? Were you brought forth before the hills? Do you listen in on God’s council? Do you have a monopoly on wisdom? Are God’s consolations not enough for you, words spoken gently to you? All his days the wicked man suffers torment…Distress and anguish fill him with terror; troubles overwhelm him, like a king poised to attack, because he shakes his fist at God and vaunts himself against the Almighty, defiantly charging against him with a thick, strong shield. Let him not deceive himself by trusting what is worthless, for he will get nothing in return.”

This is echoed in Revelation 16. We read that people will continue to curse God and refuse to repent of their sins even as the terrible bowl judgments are poured out upon the earth in the last days. “From the sky huge hailstones, each weighing about a hundred pounds, fell on people. And they cursed God.” (Revelation 16:21) We’re left with the image of a prideful and defiant people who shake their unrepentant fists at God, cursing him, rather than bow in repentance. As evangelical theologian D.A. Carson says: “Hell is not filled with people who are deeply sorry for their sins. It is filled with people who for all eternity still shake their puny fist in the face of God almighty in an endless existence of evil, and corruption, and shame, and the wrath of God.”

I doubt that you would be so blatantly rebellious. But our pride and lust for “my way” are fist shaking ways of separating us from God’s great call to live a life fully devoted to Him. Our gracious God gives us each the choice to go “my way” or “His way.”